loveallthingsitalian said:
For a while there Anne Dawson took to wearing camo cargo trousers and T shirt .Unfortunately it looked more Vietnam war refugee than fashion.
Click to expand...

I'm glad she gave up that look. OK on a teen, but not on Anne. The thigh pockets on cargo trousers don't cut it for anyone. Bulk where you really don't need it.

SisterBliss said:
Langy could put her logo on a skidmark & the numpties would buy it. The messages/interaction ontheshow is a bit cringe
Click to expand...

Especially the messages that tell her that her Thursday shows are the highlight of their week. I agree, they're interesting to watch, but you feel like telling these particular ladies to "get a life".

SisterBliss said:
Langy could put her logo on a skidmark & the numpties would buy it. The messages/interaction ontheshow is a bit cringe
Click to expand...

And I get the impression that Ruthless is bored stiff with it. She shakes her head (like a tic affliction) and smiles through her teeth then moves swiftly on. I think she's even getting irritated with Kabler of late, Jackie rambles on like a 15 year old that's been swigging the dregs of the wine bottles, starts laughing incoherently then picks up her tablet ! meanwhile Ruthless carries on with her hand sweeping motions and carries on yakking about her orange piping !!
M

I think it might be interesting if they switch it up a bit. Maybe pair Ruth with Annaliese?

loveallthingsitalian said:
For a while there Anne Dawson took to wearing camo cargo trousers and T shirt .Unfortunately it looked more Vietnam war refugee than fashion.
Click to expand...

Why would she wear that and where is she??
G

Vienna said:
I`ve no idea how anybody can find camouflage patterned clothing nice ? Years ago there used to be Army and Navy stores which sold ex Military surplus. No idea if they still exist anywhere ? Anyway the shop always smelled of sweaty feet and BO and the one in my then home town just had everything in piles here, there and everywhere. They sold foreign Army surplus too and you could buy Russian, German etc ex military wear.
One of my sons went through a kind of Goth phase (he`s 45 now ) and wouldn`t wear anything which wasn`t black. He bought a huge black great coat from them which was ex Royal Navy I think and it came down to his ankles and a pair of ex Army boots. He looked like a younger version of Uncle Fester but with hair !
Funnily enough my oldest son has been in the British Army for 30 years this year and his wife is also ex Army and I know for a fact that neither of them would consider buying or wearing camo clothing in their private lives. It would be like civilian workers wearing their Bank uniform or shop uniform to go out in.
Click to expand...

Truse, but others like it and it is fashion.


Brissles said:
I think she's going down a bit of a weird route with her clothing brand. Camouflage jackets, cricket sweaters, animal print on everything, and top price on the lot.
Click to expand...

STAR IN THE HOOD

STAR IN THE HOOD

Am I alone, but I hate those bloody cricket jumpers of hers? They look too tight for a start, they cling to the bust area and the arms particularly badly. I've not seen one close up, but from a distance they don't look like knitwear, they look like some kind of plasticky neoprene. Far from a casual sporty look, for me I just think 1970's schoolteacher or secretary, and why so many bliddy colours? It's getting ridiculous now, and some of the shades are only different to another by a whisper - I guess it saves her having to think of any new ideas.
I don't know what she was thinking regarding the camo jacket. She seems to have this weird notion that it's up to her to create "grown up" versions of attire that the average middle aged/older lady wouldn't normally even half consider wearing. I wonder what's coming next - baseball caps, parachute pants, ammo bags? G.I Jane Asher - Not a good look I'm afraid!

"Love it". "Perfection". Don't know about you guys but when I see Ruth Blagsford in camo I want to grab my assualt-rifle.. 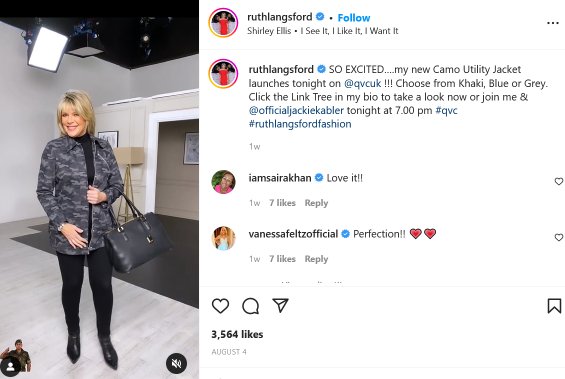 A 'nothing special' jumper - where the arms are clearly too long again as they are wearing them rucked up to the elbows. Unless you have a 34" hip and below, then the hemline will look tight and pulled whichever size you buy. Its probably going to be £59.99 reduced to £34.99 as a tsv. My money will be going on the energy bill not some unremarkable sweater.

I see Vanessa (gobby) Feltz has commentated that the Camouflage jacket is 'perfection'. The image of Feltz in one of these would scare small children let alone horses and squirrels ! Seeing Ruthless in the jacket above - and being 14 years older than her - is not how I want to look which is far too structured for me, even the bag looks clunky.

Camo jacket to go with the helmet hair (is she thinking of joining up.). Someone should tell her that handbag is all wrong for that “look”
S

maymorganlondon said:
I think it might be interesting if they switch it up a bit. Maybe pair Ruth with Annaliese?
Click to expand...

Ruthie reckoned that she had gone a size larger in her Camo jacket so that she could wear a jumper underneath, yet she still had no chance of zipping it up and didn't even try to! Neither use nor ornament then if it's windy out there and clinging on to your handbag as well as the jacket!!

I wonder if anyone has pointed out that her sizing only going up in ONE INCH increments is pointless - one inch is nothing in reality. No doubt she needs to go up in her own sizing because the bloody armholes are too shallow, perhaps she needs to fix her own design team instead of waiting for comments from her fans.

Where I live the only people that wear Camo are poachers.

SusieSue said:
Where I live the only people that wear Camo are poachers.
Click to expand...

I wonder if they'd be interested in Ruth's blue camo as a change? Probably not.
M

Camo jacket to go with the helmet hair (is she thinking of joining up.). Someone should tell her that handbag is all wrong for that “look”
Click to expand...

I know it's just all wrong. Utility jacket fgs! I can't stand it when "workwear" is touted as a fashion statement. leave it to the lefty student who decides it's cool to dress like a Navvy in a donkey jacket, or a like a squaddie in combat fatigues. Leave the boiler suits to the grease monkeys and maintenance crew, and painters overalls - yep to guess who? No Ruth, "producing" a pressed/ polyester version of these things does not fill a gap in the market, nor will it make a middle aged/older woman look trendy or edgy. At best they'll look "a bit wrong" but generally will just look ridiculous!
I forgot to say earlier I'll scream if she adds another flipping colour to her collection of shite twill jackets that are so small in the body, they're hardly worth having! She is still insisting that if she makes it any longer it'll look like a trucker's jacket. I don't get it. So you're good to go looking like a soldier that's been dressed by their mum, a carpenter who's forgotten their tools, a painter who only works with felt tip pens and crayons 'cause they don't want to ruin their overall, and lest we forget, the cleanest mechanic in the world - but a trucker? God forbid! Nobody wants to look like that!!!!